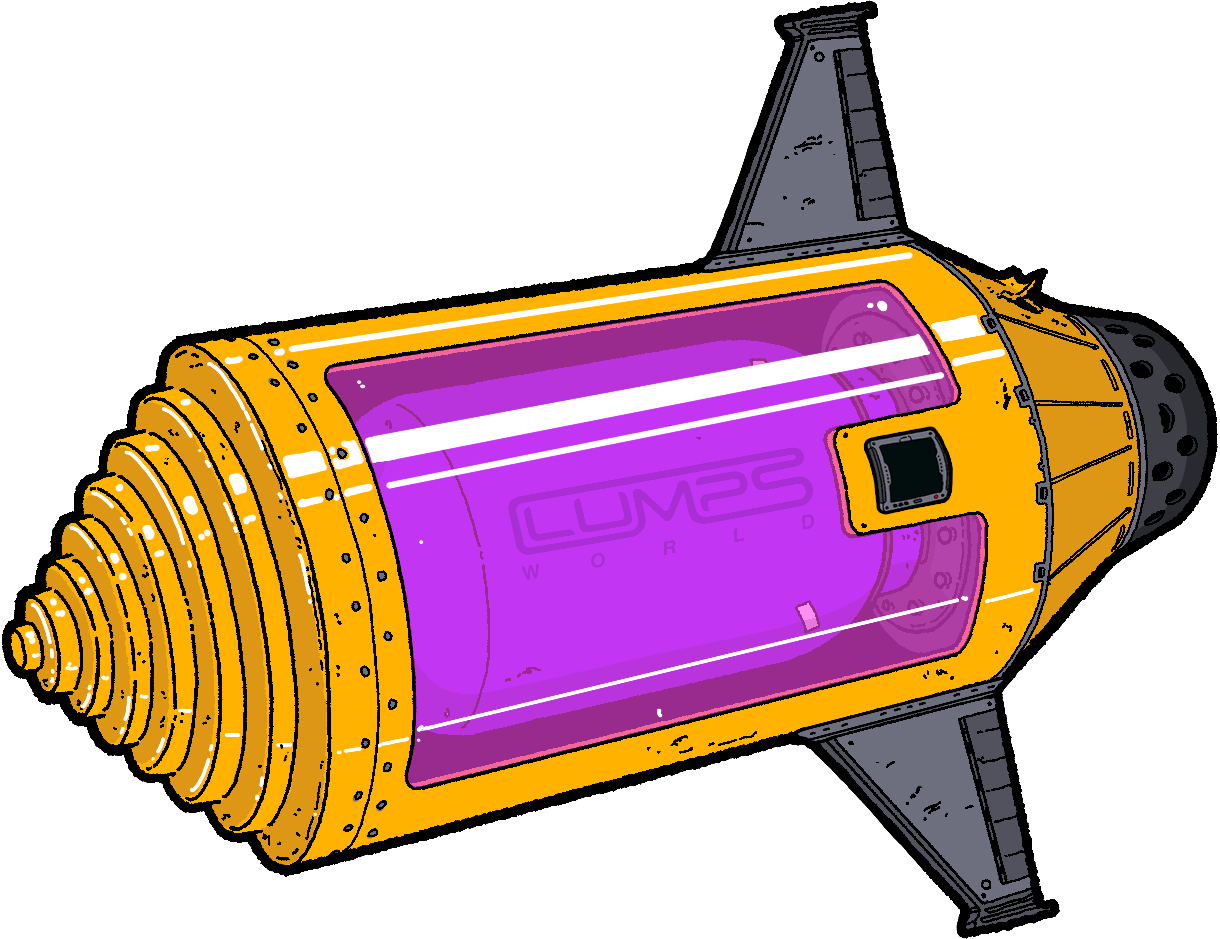 1 Lump holder will receive a 1/1 Artwork, the XCOPY Tribute Artwork.

I’m out back with Slippy. He spits out his thin brown ciggy and nods his two beady eyes towards a plank of wood, leaning against the exterior wall of the bar.

His expression says ‘move it.’

I do, without a word.

“From Before We Knew Our Fate, To Where It All Began.”

I’ve only been talking to this slug for a few minutes, and I already know better than to ask questions. He hauled me out of the bar within a sentence or two and brought me to this old back alley. The thing seems about as cantankerous as any Lump I’ve met, myself included.

But, hell. He’s here. Back from the wilderness.

And he’s the closest living, breathing thing we have to Slime Boy.

Almost now to a pure hum. I can no longer make out the words.

“Mmmm.” He stops abruptly, eyes closed. And lifts into the air, curled into a slight ball.

Before I can react to that, I feel a warm glow to my left and – oh mama – there it is. A purple doorway right there in the wall. I know what it is. I’ve seen one before. A portal to the Voodoo Realm.

The slug slams to the floor, a little exhausted.

“After you.” He whispers.

Nothing like passing through endless realities, each with unimaginable dimensions, physics, and forms of consciousness, to really put things in perspective.

We really are so damn insignificant.

“Screw it,” I thought, as I drifted peacefully through time, space and states of being, “when all this is over I’m gonna get myself a reactor chest. Maybe #147 can hook me up.”

In the vast swirling void that surrounds us I see glimpses of the Lumpsverse I could never have dreamed of. It’s hard to put into words how the scale and form of the creatures and horizons I saw appeared to me then. I remember bowling balls with whole cities inside them. Lump-like machines working on production lines of exotic foods and artworks. Even strange, three dimensional Lumps, with taller, thinner frames and bizarre expressions.

As with a dream, though, these visions fade from memory even as I write them.

I haven’t a clue what he’s talking about. But as I scrabble to guess, I see a fork in my hand. A knife in the other. Ancient Lumps pottery is at my place on an old-world table cloth, which covers a large dining table.

Also around the table are about a dozen Lumps. Simple peasant folk from… I’d say, 100 years ago. Maybe around the time of Great Mess I. It’s hard to know. There are few records about when that really was.

“The meats!” Screeches the matriarch at the head of the table.

The slug nods, he’s smoking an old pipe. Sort of thing you’d see in one of #147’s display cases.

The incredibly elderly female Lump scowls at me, before returning to her conversation with a smaller male Lump to her left. In hushed tones they seem to be discussing some kind of threat, a storm maybe, but I can’t make out what they’re saying enough to know.

As I bring the suspicious meat to my mouth, I feel a tug on my arm. And another.

I gaze down to see a tiny Lump hanging on my arm. Barely old enough to stand. He looks like an offspring who’s fallen out of his Lump dad’s backpack. He nearly stumbles, but steadies himself, frowning a little as he does

I know that frown, I thought. But can’t place it.

“Get underground!” It’s the matriarch. Slime Ear’s knows how old she is, but she moves like Litter Boy. “Everybody underground!”

All around us the windows cave in. Slime leaks into the room.

We’re in the Great Mess alright.

Underneath the table is a secret staircase and we’re all ushered down. Slippy arrives next to me on the descent.

“These Lumps are in trouble.” He tells me.

“Because these Lumps are in trouble.”

I get no answer, just a hard push against the staircase wall.

I glance down the stairs to the huddling Lumps below. Slippy’s right, the little lad isn’t there.

“What are we doing here Slippy? What do you want from me?!”

I wriggle free. Above me the trap door leading to the staircase is slowly lowering of its own accord. He’s still up there.

Slippy looks to me, “What if Slime Boy doesn’t come?” he asks.

I turn on my heels and bound back up the stairs, sliding through the remaining gap, before the door slams shut behind me. I guess the salvation of the underground bunker was never really my style anyway.

The slime is truly ghastly. I’ve heard stories, I’ve read books, I’ve watched movies… I’ve even sat in the simulation chambers. But nothing can prepare you for how it stings the eyes, steals the air, and tightens the skin.

Stumbling, I avoid the green sludge as it seeps into every crevice, nook and cranny of the old cottage I’d found myself dining in only a moment before. For a moment I’m safe on the tabletop. And that’s when I spot the lad, dangling from the pots and pans in the kitchen.

Vaulting from the table to the work surface, I grab the kid and chuck him in my backpack. He zips it up tight over his head, half scared to death.

Climbing further out of the kitchen window, I see the extent of our problem.

On the roof of a cottage in the back end of literally anywhere in the known multiverses, I am surrounded as far as the eye can see by lime green slime. What looks like an ancient mountain range in the unimaginable distance gives me a sense of just how buggered I am.

Slippy hovers next to me, back on the thin brown cigarettes.

“Welcome to the Great Mess.” He says.