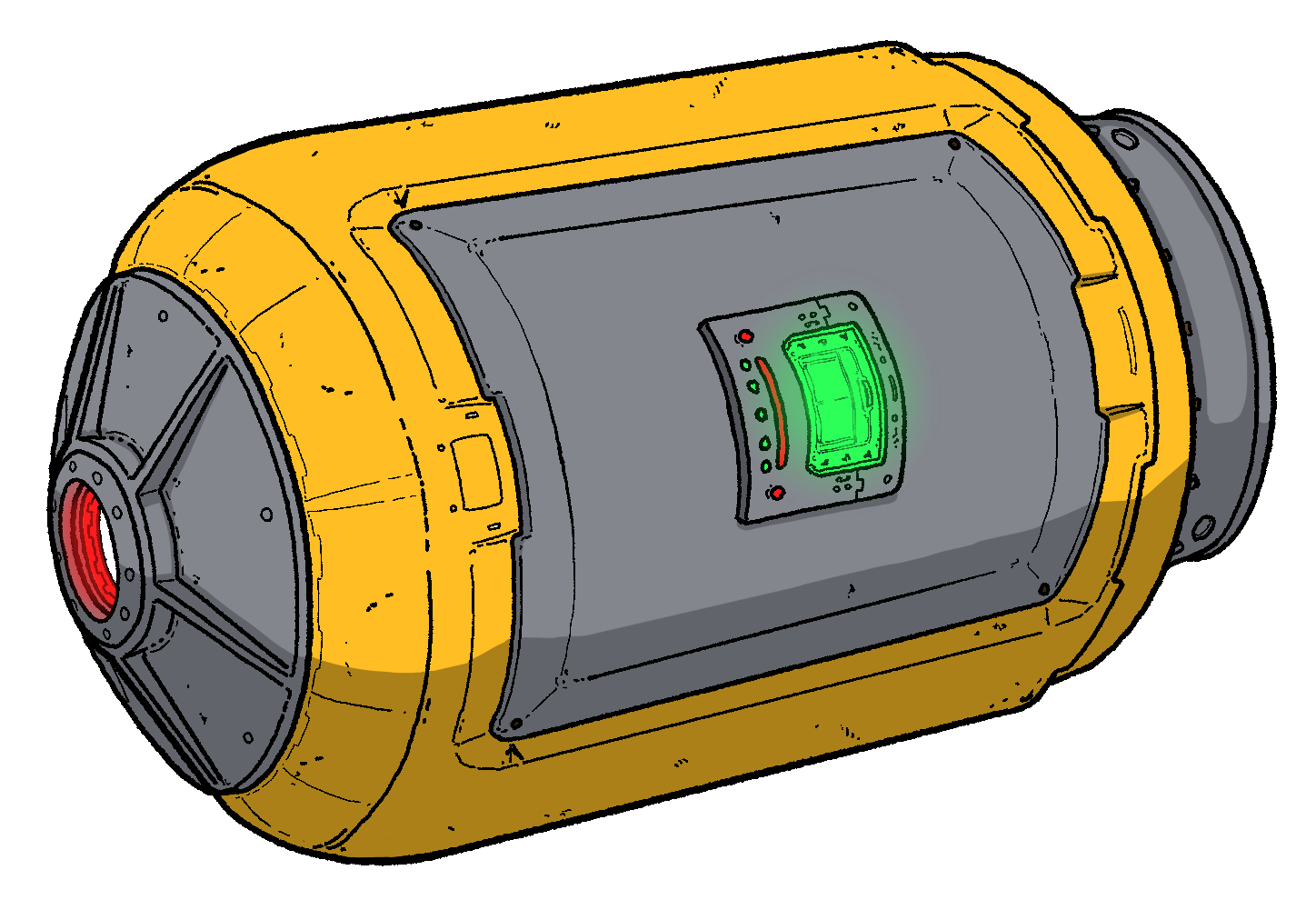 A 1/1 animated NFT version of your Lump! Each winning Lump in the new ‘Shiny Lump’ series will be custom made by artist Sam Drew and hung in the new Shiny Lumps Gallery.

10 Lumps holders will receive a limited edition artwork. This artwork is titled ‘Roll Up’ and is printed on fine art paper with a very small edition of only 10 pieces.

Selected Lumps holders who have their Lump featured in the story will be airdropped their accompanying story card. These collectible cards will give you insight into each Lump’s story. 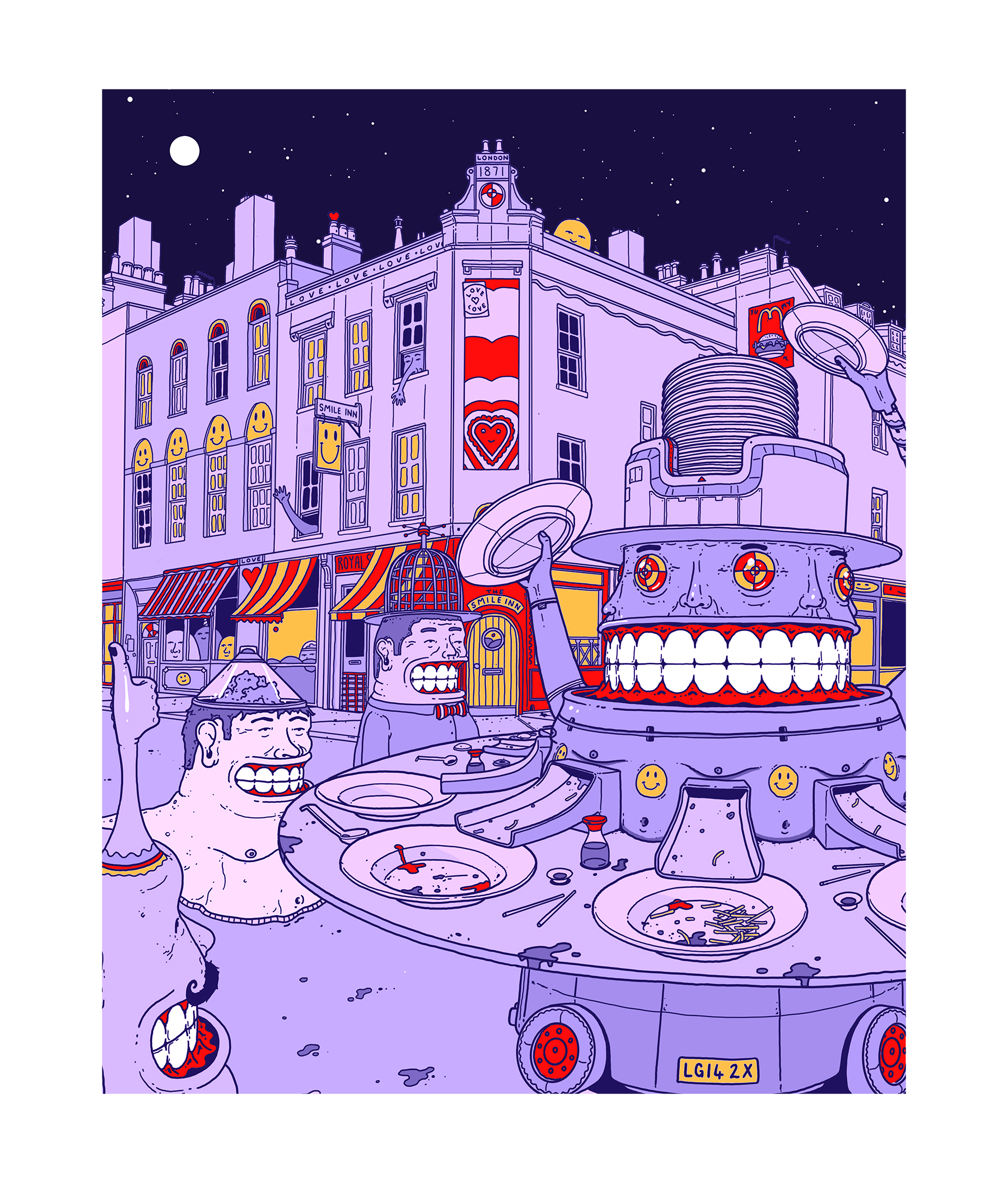 A Note for Chapter 2 Capsules

Our new and improved fulfillment partnership means winners will recieve their physical artworks quickly and without delay. Thank you for your patience while we worked this out!

‘Come out with your hands up. We’ve got you surrounded.’

Sheesh. You can say that again.

Legions of Mohawks and dozens of skilled warrior Lumps from the Voodoo and Quantum realms beat at the fortress door.

‘Hold the line! Slime Boy will be here any minute to save us!’

It’s Slippy talking. The legendary Slug-Sidekick of Slime Boy – The Greatest Lumps Legend of them all.

‘Well he better hurry the hell up! I can’t hold them much longer!’ Screams Buddy Jolly. He’s firing a forcefield at the door out of a jacked-up Silver-Screen era film projector. Right now that’s the only thing keeping that murderous mob out of here.

Sunkissed-Stu roars. What an ogre. At least the first dozen through the door are getting swept aside by his hair goliath arms. But they’ll keep coming. We’d need 10 Stu’s to deal with that mob. Not to mention the machinery #7 has at his disposal. If Slime Boy doesn’t arrive in the next few seconds, it’s Thank You and Good Night Lumps World. We’re toast.

‘Where in Slime Ear’s name is he!?!?’ Screams Deb, as dust falls from our crumbling citadel.

But, not a second later, CRACK. The door is broken. The forcefield shatters and Buddy’s projector powers off.

It’s too late. They are in. And there’s only one thing we can do – fight. I try to catch Slippy’s eyes, but they are shut. Quick as a flash, Litter Boy slips between three or four mohawks, lightning fast, and ties them up with bin bag string. Good old Nick. Never shies away from a ruck. Illusion Isabelle ain’t so lucky though and, boom, I see her struck off her unicycle and swarmed by warriors. If it wasn’t for Stu’s horrendous breath knocking them back 5 or 6 paces, they’d have had her for sure.

They’re coming at me too. I clench my fists.

In the stillness of battle, you sometimes think of these things. But it’s not long before you must get back to business.

I remember The Lumps World I once knew. And the Lump that led me to all this. I don’t know if they’re behind me any more or not. But I do love them both.

I breathe in and think of my training.

A leaping warrior Lump pulls back his staff to strike me – this is it. Before he can though, he disintegrates. Ripped apart by light. First one point. Then multiple beams. Is this Slippy’s power? The Slug is levitating to my left, eyes closed, humming quietly to himself.

The flash of light ends abruptly and the warrior is gone.

For a moment there is silence. We’re all expecting Slime Boy to appear any minute, but, instead, a tired old backpack drops from the sky and hucks against the ground. Plod. Slippy floats down next to me amidst the chaos of battle. Connected to the backpack is a thin clear tube which is attached to a small pistol.

Glancing over to the jukebox, I think back to that moment on Mushroom Fields. Parade Day. When the Disco stopped… At the very second I laid eyes on the Mushroom Headed Slime Ears. But why?

The ghouls from #7’s mansion. The coach driver. B.B. They were all from different times.

“..Rumour has it he’s got a bunch of Mohawks working out of town on something BIG..” Yeah, right. Tell me something I don’t know. But there’s something that just doesn’t make sense to me; If time is repeating itself and this has all happened before… why do I recognise things? How do I know what #105 is about to say before he says it? How do I remember #147 saving my life at the beginning and end of this terrible loop?

I’ve never remembered it before. Suddenly I am aware that I’m a hamster running on a wheel. Why now?

As I’m writing this, my pen breaks. Cheap Reactor Chest shit I picked up at Lumps World Fashion Week.

And that’s when it hits me. My diary. My capsules.

Slime Ears only knows how long we have been in experiencing this Groundhog Day existence (it’s a movie we have here in Lumps World about the same day repeating over and over… you wouldn’t understand). But maybe, MAYBE… Maybe you have broken the cycle. For every time I have sent these capsules in the infinite regress of time before this, they must have remained unread. Unacknowledged. Invisible to the one consciousness of the multiverses.

We may be going through this loop for the last time. I may have the power to change what happens.

I may, yet, reverse Rapture.

As I realise all this. #105 taps me on the shoulder and points to a Lump at the back of the room.

“Look at his shit Litter Boy costume.” He says, “Embarrassing.” I nod, casually.

But I know the truth. I glance at #400. He knows the truth too. That is Litter Boy. The Lumps Legends are among us. #400 notices a change in me and immediately looks like he’s seen a ghost.

Perhaps he has, I think.

Quickly, #400 scrawls something down on a bit of paper and slides it over the counter. We catch each other’s eye. He looks to Litter Boy. I smirk.

The note reads; “The capsules have worked. You are now awake. Meet me behind the bar tonight after dark.”

It’s all coming back to me now.

Needless to say, the investigation is back on track.